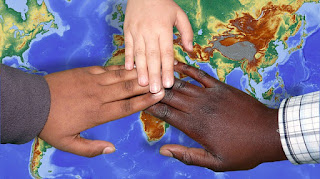 I've just released my second book in the Schellberg Cycle: Clara's Story, A Holocaust Biography. Now I realise that I'm just as naive as Clara was. We both believe in the ultimate goodness of human beings. Things can't possibly be that bad.  People just don’t behave that way.

We're both wrong. They do. Well some do, and unfortunately though they're a minority, it's a significant and powerful minority.

My teen years were dominated by friendships with people of the Windrush generation. They were just people and I never noticed the colour of their skin. They were just like me:  getting on or not at school, going on to university, starting a career, raising a family and now retiring.

I dug out photos of our wedding. I'm not going to post them here but I needed to remind myself. Elaine was my main bridesmaid. She also got a BA in modern languages. She did French and Spanish. I did French and German.  We both did our year abroad as the UK went into the Common Market.  She went to Bilbao in the winter as she didn't think she could stand the Spanish heat in the summer.  This lady who was born in Jamaica! The last school she taught in was the first one I applied to post PGCE.

Her older sister Ingrid is also the picture with fiancé Theo.  Their mum, Mrs Salmon, is on the front row, looking very elegant and very much the lady.

Other friends back in the late 1960s included Monica, her sister Mavis and Rene. When Monica got into a bit of bother and became a single mum Rene offered to marry her.  She didn't accept his kind offer but it shows what good friends we all were.

Before that at my primary school there was Celestine, a year above me,  and John a year below. Celestine was real head girl material and John could always be relied on to organise anything.  Something went awry, though, in West Bromwich. Many of the Windrush families moved into the big houses on Beeches Road and the white families started moving out in disgust.  Even I could see, as a six-year-old that this was creating a ghetto.  They wouldn’t be able to fully integrate into our way of life if they lived separately like that.

I go back to Mrs Salmon, though. A lady indeed and she embraced Englishness totally yet there was still something of her Jamaican life about her. Thank goodness. We miss out if we don't take the gifts our immigrants bring. She brought us chicken cooked with lemon and sweet potatoes. We probably take them for granted now. Back then they were new to us.

The law was on their side then.  Any racism was tempered with a general acceptance that these people are British subjects, they pay their taxes, they obey our laws and they came to do jobs we couldn't do or didn't want to do.

Now, though, these people are under threat. Both the Home Office and the government are being much too slow to put it all right. My Clara instinct screams, "They just can't do that. They'll surely put it right." Clara has at least told me that we need to keep on fighting.
Posted by Gill James at 12:12

Email ThisBlogThis!Share to TwitterShare to FacebookShare to Pinterest
Labels: Windrush