We need to talk about our Tess 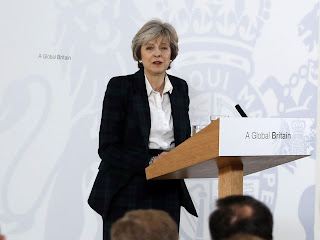 The woman irritates me and embarrasses me. She has no leadership skills. Her body language is very disturbing.  And I mean in proper photos and videos not in those awfully cruel ones that catch people in awkward frames.  Oh, yes something similar appears to happen in political cartoons but these are far more considered and although they laugh at politicians, the bigger ones will be able to laugh with them.

That woman, though, anyway:
·         She talks utter garbage. Global citizens = citizens of nowhere.  Madam, they are citizens of everywhere. She waffles harmlessly a lot of the time but it achieves nothing.

·         She has bought into the despicable game that many politicians play. Anything to stay in power.  Yet she was Remain, and along with many other MPs, knows full well that that Remain secures our future and Brexit ruins it. Even if she and I are wrong about that, how can one in such an important position go against their own conscience? As a democratically elected MP she has the duty to act in our best interests.

·         She wants to tinker with Human Rights.  Has she actually read them? There is nothing in them that prevents us from dealing effectively with terrorists and other antisocial people. It was very gauche of her to bring this all down to an anecdote about a man and his cat.

·         Thatcher made her mark, and love her or hate and her policies, we have to admit that she made an impression and showed us that women can lead – although she also behaved like a man. But Tess, my love, you're embarrassing yourself and me and I suspect countless other women. Live up to what my mother-in-law used to say.  "I don't want to have equality with men. I prefer to remain superior." It shouldn't be too difficult to be superior to that bunch of clowns, though John Major and Ken Clarke may prove to be difficult. I could forgive you for failing there.

Yes, she has a tough job. I don't deny it. I do admire her tenacity but also think it's wise to know when to give up.
But there's a problem; unless we have another election who will replace her? Moggsy or BJ?  Buffoons the pair of them but dangerous ones from the Old Boys' Network.

So what are we going to do about Tess? Is it time for an intervention?
Posted by Gill James at 12:06