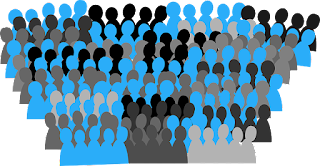 On the 23 June 2019 a referendum was held in the UK about whether the UK should remain in the EU. Just under 52% said we should leave and just over 48% said we should stay.  A very close result indeed. One lone MP said “We need to look after the 48% as well.”  A close result like that would not allow a trade union to act, especially as only 37% of the people eligible to vote in fact voted to leave. Its screams anyway that we all need to take a closer look at the problem. We need to find a third way.
The search engines heated up the next day. They were all looking for definitions of what the EU is. What? You’ve voted to leave or stay in something you don’t understand? Later conversations have proved that there is a lot of misunderstanding about what the EU actually is.

As I drove to work each day in the last few weeks before the referendum  I nearly always had to stop at a set of traffic lights that had pinned to it “£350,000,000 a week isn’t trivial”. That made me feel uneasy and I thought it couldn’t be right. I looked into it. It’s actually nearer £250,000,000 and we  get most of it or perhaps more than it back: money for our regions, particularly Wales, farmers’ subsidies and major funded projects. “So will the government give us that now?” they cry.  On your bike, sunshine.  I pay enough tax already.  Looking at it another way, for approximately £134 a year per person we get a set of laws that are fair, a court we can go to when our own judicial process fails us, access to many international projects and grants, a significant say in what goes on in the great landmass just offshore and the access to the same emergency medical treatment as nationals in 27 other countries. The latter will cost more than that if you have to have a year round policy because you travel a lot.  Ironically the port of Ramsgate is crying out for EU money and won’t be able to offer a port to the shipping company that has no ships that was to help deal with the post-Brexit chaos.

“It was the Boomers,” they said. “They want to take out citizenship away.” Not this Boomer, actually and in fact I only know a handful who voted Leave, but I guess that’s just the circles I move in. It is highly likely that many Leavers have now died.  Many Remainers have become 18. Many Leavers have changed their mind.

Then we find out that Leave broke electoral law.

And possibly our Russian friends were involved.

The two main political parties are divided but MPs have to follow the instructions of their whips.  We have to trust our MPs to represent our interests, and I actually believe mine does.  I also totally accept that from time to time he will vote in a way that I don’t want him to but for the most part he’ll represent my views.   He is also duty-bound to be clued up and act in our interests, often on matters that we don’t know enough about to form a valid opinion.  Doesn’t there also come a point when he must go by his conscience?   It is puzzling that so many MPs are clear that Brexit will bring about many uncomfortable changes yet they still go ahead with the “will of the people” which wasn’t ever that strong in the first place and looks decidedly weak now.

And let’s look at “the people”.  What about all of those working age people who pay taxes here, propping up our aging and young population, who didn’t have their say? And the disenfranchised British nationals who have lived out of the country for more than fifteen years who also can’t vote in the state where they live.   Oh, the Boston tea party failed completely. We still have taxation without representation on this planet.

So who should vote on national matters? The people who live and pay taxes in the country for sure and the nationals of that country wherever they live?  I can see arguments for and against both. Yet couldn’t common sense establish something? Something like the allowance to vote after you’ve been paying taxes for three years?  Having 0.5 of a vote if you’ve been out of the country for more than fifteen years?

Is the EU crumbling? There is anti-EU feeling in Italy, unease in Spain and Germany and civil unrest in France.  A shame. The EU could have fulfilled Churchill’s idyll of peace in Europe, of people being citizens of their own country and of Europe, and the 28 together could be a really strong unit.
Yet maybe we have greater cause for concern at home.  At least Brexit has highlighted our PM’s disregard for democracy and at least we have been able to stop her.  Some sort of democracy is still working but we need to be vigilant. Three times she has tried to rush through decisions without proper parliamentary process.  More worryingly, perhaps, both she and her predecessor have tried to fiddle with the Declaration of Human Rights.
Let’s hope there is enough democracy left to keep the world safe.