A post card to the PM and the our MP

On Thursday 1 September Martin and I and hopefully thousands if not millions of others have done the same.
It's actually quite difficult to put on to half of the back of a post card what you think about Europe after being very closely engaged with it for over 40 years. 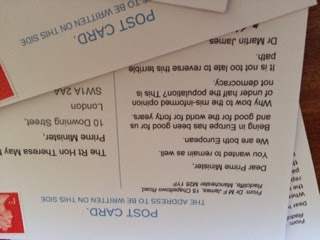 This is what we wrote:

Dear Theresa May,
You wanted to remain as well.
We are both European.
Being in Europe has been good for us for forty years.
Why this hideous divorce?
Al those young people who want to remain. What about them?
Do the right thing.
Dr Gill James (Speaker of four EU community languages) 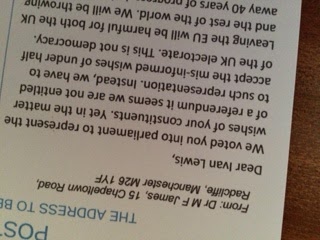 Dear Ivan Lewis,
When will you reassure me that the 48% voters in the recent referendum will get some representation? After a general election with one party gaining 52% of the votes and the other 48% that 48% is still represented. Not so, apparently in a referendum.
Both sides of the Bexit / Remain debate used lies but the particular ones used by Brexit were hideous. And there is no real Brexit plan. Not to speak of the billions we have already lost.
We vote for you to have our best interests at heart. In fact anyway more MPs wanted to remain that leave. Will you stop us shooting ourselves in the foot?
Do something before it is too late.
Dr Gill James 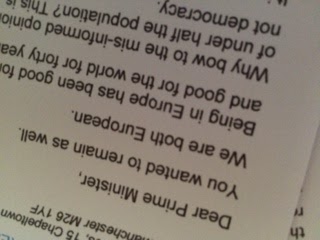 Dear Ivan Lewis,
We voted you into parliament to represent the wishes of your constituents. Yet in the matter of a referendum it seems we are not entitled to such representation. Instead, we have to accept the mis-informed wishes of under half of the UK electorate. This is not democracy.
Leaving the EU will be harmful for both the UK and the rest of the world. We will be throwing away 40 years of progress. Indeed, the majority of MPs realise this, and wished to remain in the EU.
Please do something before it is too late.
Dr Martin James 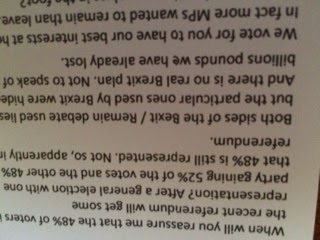 Dear Prime Minister,
You wanted to remain as well.
We are both European.
Being in Europe has been good for us and good for the world for forty years.
Why bow to the mis-informed opinion of under half the population? This is not democracy.
It is not too late to reverse this terrible path.
Dr Martin James 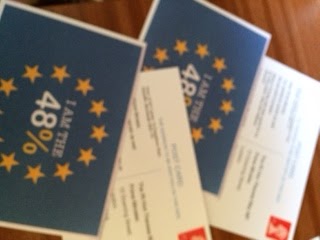 Why do we feel so committed to Europe?

Here's what some others said on their post cards: