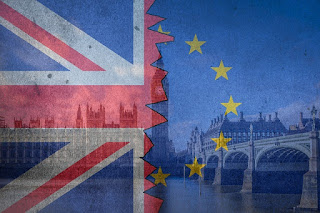 I pick up the milk and pour it on my muesli. I’m a compulsive reader so I read the label. “Fair prices for farmers,” it says.
“Does that mean it’ll go up after Brexit because the farmers won’t get their subsidies?”
“Or we’ll be paying higher taxes to cover the subsidies?” says my other half.
“Ah Ah. But what about the £350,000,000 a week that we won’t be paying to the EU?”
“The regions. The regions.” He rubs his hands in glee. “I’m looking forward to saying ‘I told you so.’”
“But I don’t want anybody to go through what I think we’re about to go through – not even Brexiteers.”

I arrive early for my conference in London.  It is about the EU citizen. I stop to have a look at the ongoing vigil outside the Houses of Parliament.
“Thank you for doing this,” I say to the woman waving a European flag. “How does this all work?”
“We’re here while Parliament’s in session. Then we make a lot of noise if a politician comes out. Recently Shirley Williams told us not to give up.”
She offers to take a photo of me holding her flag. What fun!
“You know I’m a member of the Labour party but can’t vote labour at the moment.  In fact, I don’t know who I would vote for if we had another general election,” I tell her.
She nods. “I usually go for the centre.”
I study the board showing who supports this campaign. I get into conversation with a woman form Northern Ireland.  “You know,” she says, “my daughter-in-law comes from Madrid. They got married the day after the referendum.  My son had to change his speech. He’d put something in it about how it was great that we were going to continue to work together. “
I shudder when I think of the Irish border.

There are the normal introductions at the conference.  “What brings you here?” asks a pleasant young man who is sitting next to me.
“I used to teach languages,“ I say. “And I happen to consider myself European more than merely British. I can’t help it. Bits of the Dutch, French, German and Spanish cultures have rubbed off on me. Plus a referendum is only a referendum and it was flawed anyway.” Oh, I’m on a roll now and he is nodding his head enthusiastically.  “Some who voted leave are now dead.  Several more Remainers have become eligible to vote. Several Leavers have changed their mind.  Then there were the lies, the breaking of electoral law and - I didn’t want to believe it – interference by the Russians, though now it seems that this is probably true. It’s madness. And you?”
“I want to retain my true citizenship.”

The conference gets underway. Some of the language disturbs me. There are more than 3.5 million EU citizens in the UK, surely. What about all the British nationals living here? They’re EU citizens, aren’t they? As are the native neighbours of all of those Brits currently residing in other EU states.  A panel chair speaks of the “remaining 27 states” – not as bad perhaps as a news broadcast a few weeks ago suggesting that the other 27 states had voted to remain.  The delightful Dr Ruvi Ziegler talks about “if the UK leaves the EU”. I suggest in the Q & A session that we need more of the latter and less of the   former. Ziegler assures me that he always says “citizens from other EU states”  - one of my own pet phrases in fact - recognising that at least until 29 March 2019 native Brits are EU citizens.

Over a glass of wine at the end of the conference I speak to a Danish woman who has lived here for many years but has finally returned home, keeping a small holiday home in Dorset.  “You know a lot of other states are thinking of leaving now as well.”
“We’ve started a trend, have we?”
“They’re looking for someone to blame.”
We agree that we both know that the economic downturn was due to bad practice in American banks.  We both suspect it would have been worse for us if we’d not been in the EU. We agree though as well that the EU could work better but that leaving it is worse that staying with it and reforming it.
She touches my arm gently.  “Never mind,” she says. “It can’t stop you being European. “
There’s the crux of it. She, like I, has lived and worked abroad and gone through all those steps it takes to get to know another culture and its language.  It’s hard work and it can be painful at times but the rewards are fantastic. Oddly, although I’m a Boomer, I have few friends who voted Leave.  The few that did haven’t had that glorious “bain de langue et de culture’” that I’ve been privileged to know.

As I walk back to the tube station I remember a conversation with some other Danes a year ago. They were a choir visiting my choir. Of course Brexit came up in the conversation. They reminded me that they’d had a referendum just before they joined and the people had voted against joining, with a very similar divide to the one we’re experiencing. “I’m so glad our government ignored it,” one of them said. “We’ve only benefitted from our membership.”
The flag-wavers have now gone from in front of the Houses of Parliament.  Their work is done for the day.
I buy my dinner at Euston statin and am served by a friendly Pole. Who will do this work next year?
I’m thankful as I head back to Manchester that I’m returning to a city that vote Remain.